@YikYakApp: A Great Idea, If America was mature enough for anonymity

Posted on November 9, 2014 by Morgan of DCFunemployment 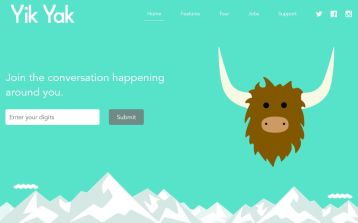 This is what scandals are made of.  Over the summer, I met a young man in the vineyard, who told me a funny little tale about an app called Yik Yak and how he played a part in it’s rapid fired spread and crash in Chicago.  We’ll call him Warren.  Warren went with a group of high schoolers to attend a conference for other mature bright students like himself.  They had a great time sharing ideas and Yik Yak was used as a public message board to enhance their conference experience.  Yik Yak allows users to post anonymous messages to others who are located nearby.  There is no monitoring and no rules.  I imagine you are starting to see where this is going.  Excited and ready to share, these conference goers brought the app back to the masses at school and EVERYONE downloaded it instantly as the kids do.  And then it began… Teens discovered that this was the digital version of writing on the bathroom walls and began leaving messages about each other.  Being teens, most of the messages were not nice.

Here is the email that Lake Forest High School sent out to their parents:

I am writing to inform you of a mobile app that is harmful to students and to the positive school culture of Lake Forest High School. I am also writing to ask your support in addressing this serious issue. One of the hallmarks of Lake Forest High School is our supportive environment and our commitment to the well-being of one another. Collectively, we have an opportunity and responsibility to ensure to maintain our positive school climate.

The app is called Yik Yak. It allows individuals to send text messages anonymously. These messages are received by all of the anonymous users in a given location, such as our school. Sadly, we have found that this app is allowing students to verbally abuse each other as well as faculty and staff at LFHS.

Posts can be especially vicious and hurtful since there is no way to trace their source and it can be disseminated widely.

At the school level, we have blocked access to the app on our network. Nonetheless, students can still access the app through their cellular network.

As a school policy, we are prohibiting Yik Yak and will continue to enforce our current technology code of conduct.

We are working with our legal counsel and the local authorities to see what recourse we have against individuals who have posted items that are harmful to individuals and disruptive to our school setting.

Accessing the app on their phone, despite not making comments, is creating an audience for bullying behavior.

A significant way that we can deal with the app is to promote digital citizenship at home and at school. This is a learning opportunity for students on how their behavior and the choices that they make can impact others and their own future in a digital world. Our faculty and Student Council will be addressing this issue at school. We ask that you have a meaningful conversation with your son/daughter. We also recommend deleting the Yik Yak app and reviewing the apps on your child’s phone. Together, we can continue to make Lake Forest High School a safe place for students to live and learn.

Yik yak to their credit  took responsibility and action which is commendable.  They worked with a company to create digital fences around schools so that the app cannot bee used there.  Save it for the cheerleaders’ house parties people!!! That moment when the girl with four eyes and frizzy hair (aka me) shows up uninvited to the bash like back in my day!!

Well as much as I wanted to think that the older folks could handle the internet, Yik Yak has struck again and sadly at my alma mater, Cornell College in Iowa.

Okay before we get into what happened let me say this: *Climbing onto my soapbox* So why are we as a country so uncomfortable talking about slavery and this countries past and how it still effects us ALL today. We are not post racial, stop lying to yourself.  ALL our ancestors did some messed up things, some for greed some for need.  We need to talk about it if we truly want to move on.  We are a country divided and it makes me so sad.  In the words of Lauryn Hill (ex-factor) – “It could all be so simple, But you’d rather make it hard. Loving you is like a battle and we both end up with scars. Tell me, who I have to be to get some reciprocity.  No one loves you more than me and no one ever will”  America America America smh.  I really try but I often contemplating leaving the country that seems to refuse to love me back. *Climbing down… for now*

So back to Cornell College in Iowa (yes I went to school in Iowa, we can talk about that later).  Our Black Awareness Cultural Organization along with other groups on campus sponsored Privilege Week, a series of discussions and panels. Topics included gender, race, religion and education.  The intended purpose of the event is to raise awareness about what privilege is, why it persists and how to combat it.  Those who disagreed took to Yik Yak to express discomfort with the idea of privilege or lash out at minority groups on campus. One message read, “I feel offended for being called out as privileged just because I am a white, straight, well-abled Christian male. Without inequality, where is the incentive to become better?” (Whoosahh I’m not gonna climb back up yet but SERIOUSLY!?!?)

To credit the current generation of Cornell students, they took the negativity and turned it into opportunity.  They took a serious look at the comments and considered how people really felt about the events.  They used it as a chance for dialogue.

During my time at Cornell, the organization for College Republicans decided to host Republican coming out week because they felt “oppressed” as the minority group at a Liberal Arts College.  One of their activities was to host an “Affirmative Action Bake Sale”. Here was the poster for the sale:

Are you mad?!?! Cause I saw red when I first read it. I calmed down when I was told that it simply saying that it was a dollar to not have my race considered, it was not meant to say that black woman were considered less than human (uh huh). During the heated debated that launched during the event, a straight white male republican told a black female who was almost a legal midget that she did not understand what it was like to be in the minority (pause and let that irony sink in).

My other favorite moment was when the Latino female republican told me that she did not check the race box and got here on merit and sometimes people wonder if I earned my place there (which was the first and only time that I felt like people questioned my place at the place that had after 3 years become home to me)… well excuse me Maria Lopez-Garcia, you didn’t need to check the box THEY READ YOUR NAME so if you want see who belongs here let’s bust out test scores and GPAs cause I got a 1350 and graduated with a 3.4 from some of the best schools in the District so don’t try me. (sorry just leap on the box without telling anyone… stepping down now).

Back to my original point, Yik Yak, you are great in theory but America is too confused and oppressed to handle your app. We need to still be monitored because hurt people hurt people and until this country heals, Yik Yak will continue to face problems of misuse which is sad cause it has the potential to be a great place for dialogue.

Welcome to DCFunemployment. My name is Morgan and I am a native Washingtonian. In this post Paris Hilton era, socialite has became a bit of a dirty word. However by definition, a socialite is a person who is well known in fashionable society and is fond of social activities and entertainment. Like it or not, that's me so these are the diaries of a reluctant socialite. Follow me here or on social media to see some of the best that DC has to offer.
View all posts by Morgan of DCFunemployment →
This entry was posted in App, Change, College, CornellCollege, Dialogue, Racism and tagged Applications, Internet, Scandal, YikYak. Bookmark the permalink.