Posted on March 2, 2016 by Morgan of DCFunemployment

DCFunemployment: Tell the people – Who are you?

Judy Kurtz, The Hill’s “In the Know” columnist and a contributor for Fox 5/WTTG-TV and E! News/E! Online. Three jobs are the new one job, right? (DCF: Girl we know all about that over here!!) I cover gossip, politics, entertainment, and the D.C. social circuit in my role at The Hill, as well as co-manage our annual 50 Most Beautiful list. I also appear multiple times a week on Washington’s Fox 5 to get viewers “In the Know,” and I write about the intersection of Hollywood and Capitol Hill for E!.

DCF: What does being funemployed mean to you & what was your path to funemployment?

JK: Being funemployed (which, as a lover of wordplay, is a term I adore!) means loving what you do to the point of that it doesn’t feel like work.

I started my career focusing more on the “employment” than the “fun” part, jumping at an opportunity right after college to work in television in a super glamorous job: running teleprompter at a station in Nashville, Tenn.

From there, I got reporting gigs in Washington and Baltimore. But I’ve always loved pop culture, lifestyle and feature reporting, and entertainment. Ultimately I landed my amazing job at The Hill, followed by my roles at Fox 5 and E!.

DCF: Who was your first cheerleader?

JK: Sounds cheesy, but my parents have always supported me in anything I’ve wanted to pursue. Well, except for when I requested a pony.

But I’ve also been extremely lucky to have incredible mentors who have guided me throughout my career. During college I interned at Washington’s local NBC affiliate, and the executive producer there, Margie Ruttenberg, was an absolute force of nature and an amazing role model for me. In a case of things coming full circle, Margie’s now a manager at Fox 5, where I currently work, and is still a big part of my life. 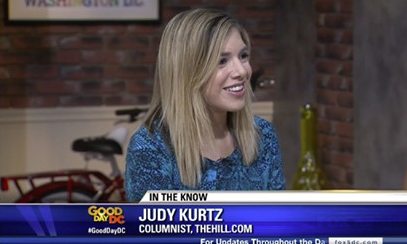 And at the risk of sounding like an utter suck-up, I’m beyond fortunate to have an incredible boss, The Hill’s Editor in Chief Bob Cusack, who besides being a fantastic journalist and manager, also happens to be a phenomenal human being.”

DCF: What experiences in your life prepared you for where you are now?

JK: Growing up in Washington with a journalist dad probably didn’t hurt! (DCF: Native Washingtonians in  the house!!)

Internships are also a terrific way to get hands-on experience in virtually any industry, and certainly helped me.

DCF: Where do you get your inspiration and/or motivation?

JK: My family is my number one motivator. No matter what kind of day I’ve had, whether it was phenomenal or particularly challenging, seeing my two-year-old’s face when I walk in the door brings me joy.

DCF: What does balance mean to you and how do find balance?

JK: Still searching! Even doing a job I love, finding a balance between work and home life is a daily challenge. I couldn’t do what I do without a support system, which includes my husband who doubles as my life teammate (and sometimes coach).

DCF: What sacrifices did you have to make to get here?

JK: The news doesn’t stop, so kind of like a doctor (without the whole “saving people’s lives” part) as a journalist, you’re often on-call 24/7. Especially when I was working in television, I did my fair share of nutty hours, holidays, and overnight shifts. It’s not only tough on you, it’s hard for the people you love.

DCF: What struggles have you faced as a women in your industry?

JK: Feeling like you’re being talked down, underestimated, or not taken seriously are some that come to mind, along with some sources thinking you’re looking for more than just a story… But that being said, I’ve found that particularly in the journalism world, women can also be some of the biggest cheerleaders of other women.

DCF: What is the early advice you didn’t listen to that you wish you had?

JK: This might sound like a politician’s answer, but not to be such a perfectionist. I was told that by one of my elementary school teachers, and being the perfectionist that I am, was bent out of shape about it. (DCF: Oh the irony!!)

While accuracy is a non-negotiable, sometimes in the fast pace of the news cycle you have to file a story that could’ve been more perfectly penned or eloquent if you had more time. Same goes with live T.V. — things aren’t going to go right all the time, and you have to roll with the punches.

DCF: What was your greatest failure and what did you learn from it?

JK: One of my greatest failures actually turned into one of my biggest successes. I was working as a T.V. reporter in Baltimore several years ago when Olympian Michael Phelps was caught on camera smoking from a marijuana pipe. It was a huge controversy, especially in Baltimore, where Phelps was from and lived. A news director wanted me to go try to go land an on-camera interview with Phelps.

It seemed like an impossible task, since Phelps was staying tight-lipped amid all the drama. I expressed to my bosses that it was likely a total waste of time to stake out Phelps’ house to try to land an interview, but they sent me anyway.

My photographer and I pulled up to Phelps’ house and lucked out — we eyed him taking out the trash and made a mad dash to talk with him.

I ended up getting an exclusive interview with Phelps, and it taught me that sometimes half the battle is just showing up, to never doubt what you can do, and to never throw in the towel before you’ve made an effort. Also, pray that big news stories happen on garbage collection days. (DCF: Sometimes success is a funny combination of persistence and a bit of luck).

DCF: What is your proudest moment?

JK: Giving birth to my son, getting my Master’s degree from Georgetown University while holding down three jobs and pregnant, filing roughly a bajillion stories during any given White House Correspondents’ Association dinner weekend!

JK: The 2016 election, getting ready for this year’s 50 Most Beautiful, and incubating Baby #2, due this spring!

Welcome to DCFunemployment. My name is Morgan and I am a native Washingtonian. In this post Paris Hilton era, socialite has became a bit of a dirty word. However by definition, a socialite is a person who is well known in fashionable society and is fond of social activities and entertainment. Like it or not, that's me so these are the diaries of a reluctant socialite. Follow me here or on social media to see some of the best that DC has to offer.
View all posts by Morgan of DCFunemployment →
This entry was posted in GirlBoss, News, TheFunemployed, Women and tagged E!, FoxDC, JudyKurtz, News, TheFunemployed, TheHill, Washington, WashingtonDC. Bookmark the permalink.